Reflecting on The Curious Case of Siti Aishah

The latest season of TV Thriller Homeland began with an ex-CIA officer trying to defend an American of Nigerian descent, Sekou Bah, who was arrested for terrorism-related charges using the controversial method of entrapment.While Sekou is not guilty of what he is accused of, he is certainly not an inane bystander either. As a religious person angered by America’s foreign policy, he spewed hatred against America on the Internet, posting pictures of slain American soldiers, and appears to be implicitly supporting suicide bombing in Afghanistan and Iraq.

One can see that there is a lot of moral conundrum involved for the officer and it is commendable that a TV show did not try to sugarcoat any of it.

In fact, the series never gave a complete picture as to who Sekou Bah is. Is he a terrorist sympathizer, potential recruit, or just someone exercising his freedom of speech on questionable government actions? That is all left to the viewers.

The same conundrum was placed on Malaysians in the case of Siti Noor Aishah Atam, who was charged for a terrorism-related offence in court, first acquitted in 2016, but then re-arrested, re-trialled, and ultimately sentenced to 3 years’ imprisonment by the Court of Appeal in December 2017.
The biggest controversy was her immediate re-arrest after the initial acquittal by the high court. It sparked an outcry by civil society organisations and political parties as on the surface, the case built by the prosecution that Siti was a ‘terrorist’ based on her alleged possession of 12 books appeared to be a weak, if not facile attempt.

But as more information surfaced, it was revealed that Siti was linked to at least two identified Islamic State (IS) operatives.

One was former University Malaya (UM) lecturer-turned-militant Dr Mahmud Ahmad, who was reportedly killed during the siege of Marawi in Southern Philippines in October 2017. Dr Mahmud was said to have helped secure funding and recruit Malaysians for the Abu Sayyaf Group (ASG) faction led by Isnilon Hapilon that has pledged allegiance to IS and had joined the fighting the Marawi with militants from ASG and the Maute group.

The other was Muamar Gadaffi Mohamad Shafawi, sentenced to jail in 2014 for providing military training to IS recruits.

The former was an academic mentor to Siti during her time as a Masters student in UM, while the latter at one point had wanted to marry Siti but was rejected by her father. The couple may have planned to travel to Syria, sources said.

Given such information, there is indeed much to reflect on what should be deemed a terrorism offence and more importantly, how should such cases be handled to neutralise any potential physical threat that can be posed by the individual and his/her associates, and prevent more cases of radicalisation into violent extremism like this happening.

A major takeaway from Siti’s case is that a high degree of public exposure can result in a polemical situation which on one hand complicates the authorities’ work and on the other, stigmatises the family involved.

Also, the failure to prosecute that was followed by the re-arresting of a supposedly acquitted individual would risk encouraging the individual’s further retreat from public life and the growth of more anti-establishment thoughts in isolation.

However, this should not be taken as the indication that Malaysia should move back to the Internal Security Act (ISA) days where detention without trial was conducted with very little information available to the public and recourse for those detained, be it rightly or wrongly so.

Instead, considering that successful CVE efforts require strong police-public cooperation, it is vital that the authorities maintain a high standard of forensic stringency as well as adherence to the rule of law to gain the confidence of the courts and the public.

To be fair, Siti’s initial acquittal is an exception rather than the norm as the Malaysian courts have convicted over one hundred suspects of terrorism-related offences, according to Malaysia’s anti-terror chief Ayob Khan.

The public, while rightly pressing for more transparency from the authorities, should also be mindful not to over politicise such issues because lowering the morale of the police and pushing them towards more obscurity in their work is a ‘no-win’ situation for everyone. There should be a degree of maturity in accepting and discussing the complexity of such cases.

Police work needs checks and balances no doubt, but the acts of checking and balancing have to be based on balanced reasoning too. Martyrs should not be made just for sensationalism’s sake.

Nevertheless, preventing future radicalisation cannot be solely dependent on law enforcement. After all, if that works, Malaysia’s relatively heavy punishment on terrorist-related offences would have been a good-enough deterrent. For instance, Gadaffi, one of Siti’s associates, had his jail sentence tripled to 15 years in 2016.

Yet, that has not been the case. An upward trend of arrests by the police is recorded on a yearly basis.

Hence, there is a need to reexamine some of our simplistic assumptions about the radicalisation process. Some still place the blame on reading ‘wrong’ religious books.

In the aftermath of Siti’s case, I believe the more critical question to ask is, what prompts a person to venture so deep into such materials, especially in Malaysia where the average person only read two books a year (Siti was accused of owning 12 terrorism-linked books)?

True that on the surface, Siti looks like your typical gullible subject; coming from a poor family, shy, later encountering what appears to be charismatic and driven men.

Yet, this idea of the passive female subject that is coerced, deceived, and charmed into joining Islamist militant groups is increasingly challenged in terrorism studies.

While it is true that gender-stratified roles exist within jihadist groups, the finding of female participants in active roles such as combatants, suicide bombers, facilitators and fundraisers in Pakistan, Bangladesh, and even neighbouring Indonesia makes examining radicalisation with a male-bias anachronistic to recent developments.

Similar proactive-ness can be seen in Malaysia. In 2014, a housewife and a widow were found to be recruiting females to join IS in Syria. Solo female travelers have been caught in their journey to join the self-proclaimed ‘Caliphate’ in Syria. One of them was a 14-year old who almost boarded a plane with the intention to marry another radicalised Malaysian student in Cairo before setting off to Syria.

The usual patriarchal standpoint tends to portray these women as being love-struck and tricked into a circumstance they often found too late to reverse. But it is also as likely, if not more likely, that these individuals, taking the risk of being lone travelers to a foreign and dangerous land, are people wielding considerable agency of their own lives. For the 45 female Indonesian domestic workers in Hong Kong said to be linked with IS, choosing the ‘radical’ path might be the only agency they could ever wield living a marginal, lonely, and exploited life.

Siti could be another case of an agentic person. Unlike the typical profile of a jihadist whose religious training are meagre at best (and that includes the now deceased infamous Malaysian IS militant, Muhammad Wanndy Mohamed Jedi), she was a graduate of a religious school at the secondary level, then went on to an ‘Islamic’ college in Kedah before starting her Masters in Usuluddin (Islamic Studies), most likely where she met Dr Mahmud.

While such claims will need more evidence to substantiate, Siti appears to be an individual who’s driven to active (religious) knowledge seeking rather than a mindless imbiber of information from others. Her said possession of the books is an indication of this.

Even if one does not wish to downplay the influence of Mahmud or Gadaffi, it is also not helpful to treat them as larger-than-life puppet-masters who can radicalise anyone, anytime they like. Predisposing factors must have been present already, and the mentor-disciple relationship is likely to be more towards mutual-attraction and reinforcement rather than the one-way traffic we are prone to believe.

To be sure, this article’s invitation for us to accept and ponder the complex is not meant to foster inaction and indecisiveness about the situation. It is, rather, the prying open of a window to ask difficult but necessary questions.

Perhaps, instead of asking what is wrong with them, we should also ask, what is wrong with us as state, society, and nation? How has the ‘enemy’, one of the most vilified groups in the Muslim and non-Muslim world, manage to win our youths over?

Nicholas Chan is a co-founder of and now an associate at IMAN. He is currently a doctoral student at the University of Cambridge. He is interested in the intersection of authoritarian politics and political violence, as well as modernity and iconoclasms. 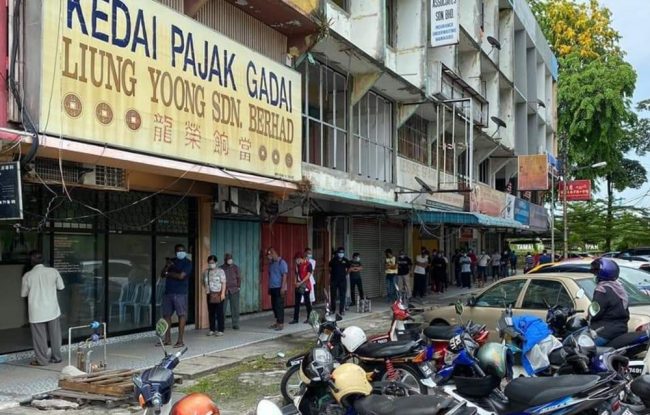